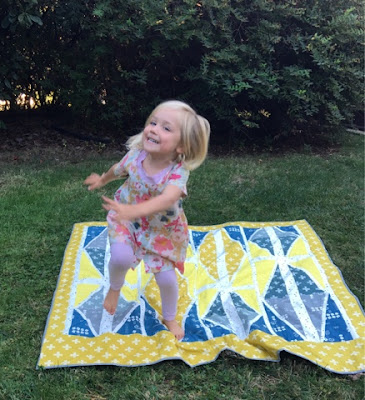 Welcome to my stop on the Pat Bravo Design: The Heartland Blog Tour.  I'm thrilled to have been chosen as one of the 20 bloggers and hope you enjoy the projects I have to share.

The opportunity to play around with the newest fabric line by one of my favorite designers certainly had me jumping for joy.

The hop started Monday and runs through October 21st,  Katie at the The Simple Life Company is also taking a turn today.

Bringing an original design to reality has been an ongoing goal and so I chose a recent one with a Scandinavian style and similar color story to interpret.   Overall I think the modified version translated nicely with a slight tweak to the placement and scale.

Don't you just love the colors and prints of the Heartland fabric?   Droppar in Burst gave a perfect bright pop and Moondust for the sashing was a great alternative to using solids.  These are only a few - the line is huge with the famous "Feel the Difference" Art Gallery buttery softness was a dream to use.

Because much of my sewing is done after the sun goes down,  it's hard to get decent progress pictures.    The creative process and steps along the way are important - but so are pretty pictures!

Which leads me to my second thought - to include the my adorable granddaughter dressed in the luxurious Blomma Garden Pastiche in voile from the fabric line.  Fortunately for me, my friend Sue offered to sew a U-neck Tunic for the occasion.

Can you tell how cozy she is?  And such a good sport posing for me.  The out-takes are mostly blurry ones of her rolling around on the quilt because, well - it's that just that irresistible. 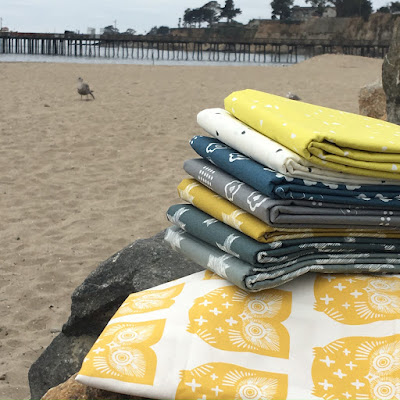 Another advantage to the lovely weave of Pat Bravo's Heartland by Art Gallery is that it behaves so well on the bias.
Some makers might think paper-piecing a design with such severe angles would be necessary to avoid distortion and they would probably be correct - with other fabrics.

#TheHeartlandBlogTour on Instagram has a few sneak peeks.  Here's a progress picture mosaic showing the blocks at various stages of construction.   Making a pattern up as I go along is pretty rewarding - especially when it works.


Thank you Pat Bravo Fabric Design for allowing me to be a part of the hop and for the beautiful Heartland Fabric.

A little Giveaway: I'll send one lucky reader some of the extra fabric that I didn't use in my quilt - including the super cute Hus Hoot Gul owl print.  (sorry, international friends - this one's only open to US, domestic shipping).

To enter,  leave a comment below letting me know if you've brought an original design to reality or not and if so what did you think about the process?   I'll choose and announce a winner on Monday 10/17. EDIT: giveaway closed. Thank you all for your comments. Congratulations to Cheryl - I will contact you directly.

Posted by CapitolaQuilter at 6:30 AM 8 comments:

For September, our BeeSewcial theme was Transitions.  Take a minute and read Anne's blog post because she says it way better than I ever could.

You can also check out Instagram hashtag  #beesewcial to see how my mates have interpreted the challenge.  We would love for you to share your version with the tag #inspiredbybeesewcial .


The block on the left measures 7"x25"   The one curve represents the bridge arch in the inspiration, the neutral surrounds as if imploding -a feeling associated with coping with change. A nod to paper piecing- with my improv paperless technique.  This technique I will definitely do again.

Block on the right 12"x21": colors are weather inspired for the 3 cities, Blue Sky (Ocean/Redwoods) Santa Cruz,  Snow for DC and Heat/Sun to represent Florida.  The design is based on houses - where we call home, but also my QDAD challenge entry that Anne encouraged me to make a  reality as well as her broken herringbone .


I've been embracing all kinds of techniques and approaches to quilt making especially as necessitated by the desire to sew original designs into quilts.  The creative zone achieved with this type of improv building and evolving as I go is really the sweet spot at the moment.


Here are the two F+F2=AMSB blocks  in July 2013 as part of a bee for Anne.  They are one of my earliest use of symbolism that I recall and also one of the rare examples of my effort paper piecing 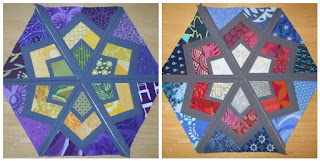 Now it feels like second nature to make with meaning - pp, not so much!.

I went to bed perfectly happy with the block (option 3 above) and then woke up with the urge to add a bit to disrupt the bar and crowdsourced on IG which was a blast.  There were a few version 2 takers but #1 and the original were a tie.  I opted to leave well enough alone.
Because the blocks were made in tandem, I toyed with the idea of joining them into one large block but the beautiful portion that I'd grown so fond of seemed to get lost (see above).  Framing out in neutral was the right choice.

When you cut and sew as you go, there are time when "the best part" gets sucked up into a seem or snipped off and discarded.   It's just part of the process.  This also means that joints pile up where you would not have as many had you calculated and positioned where they hit in advance.
This clump was cut away from the middle of a perfectly lovely improv slab when I pushed a tad bit too far.  I had to laugh and keep its as a souvenir.
When I headed out to our SBAMQG Guild meeting I wanted to show off the blocks before mailing them to Anne, especially since everybody misses her!  Flimsy blocks are hard to hold and get crumpled in transit so I tacked them to each side of a scrap of batting.
Of course if you didn't know that - you'd assume they were minis and probably wonder what I was doing making them different shapes without enough coverage.  This one especially could stand alone as a wall hanging or pillow.  It isn't likely that I'll replicate it - too many other projects on the horizon - but the idea will percolate and probably spark a sequel.

Posted by CapitolaQuilter at 7:16 AM 8 comments: