What I did Last Summer - Part One: Dog Days

Since first blogging in 2012, the number of posts has varied and the years tick away.   Weekly, monthly and more recently quarterly with the exception of Modern With a Twist.  I thought I'd write a "better late than never" and highlight the summer - the summer of 2019 that is.

One of the reasons that I started blogging was to archive memories and life changes to have a place to revisit where I can get all nostalgic or just reflect on how life changes.

This post was started and saved as a draft many, many months ago.  The Covid 19 pandemic isn't something I necessarily want to look back on but it is undoubtably life changing.  For me, Quarantine time is similar to Quilting time, a sense of similtanious standing still and flying by.  It has been and continues to be a strange, unprecedented experience.   It's ominous jumping back in to recap but I want to catch up so that I can move on, so I'm going to try.

July 2019 we brought home not one but two puppies as part of the NorCal GSP Foster to Adopt program.  We had owned two German Shorthair Pointers before and although we originally sought out to adopt one this time, we agreed to take on a brother and sister pair, 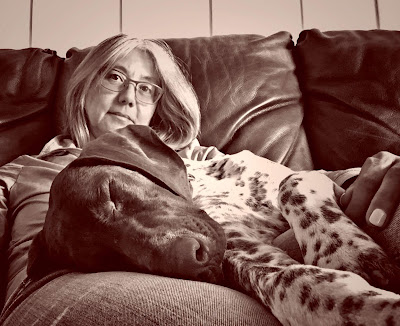 Let me introduce you to Rudy, my lap dog.   Yes, that's right, dog not dogs.  The NorCal GSP Foster program has a great support system providing sessions with trainers and even a dog walker when needed.   But it was almost immediately apparent that we could not handle both. It was also the recommendation of a professional that they would reach their own individual potential best if they were separated and fortunately a loving home was found for her. 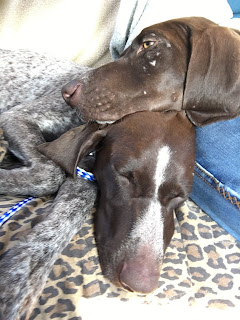 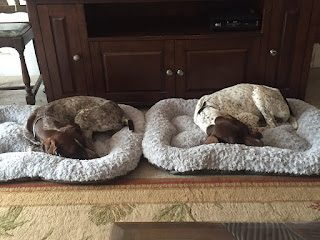 With any rescue, there is an element of the unknown.  What have they been through in their young lives and why did they end up in a shelter?  We drove a few hours away to pick them up and I took this sorta-selfie of them snuggled their scuffed faces together on my lap in the car.

It's funny how the early photos give the illusion that they are calm and easy.  That's only because most of the time they were a complete blur for the camera, constantly on the move.

If you follow me on Instagram you'll have seen this beautiful portrait (above) by Melissa Averinos, @weirdcatsofinstagram.  I was the lucky winner of her giveaway and couldn't be more pleased.  We love the one that we had commissioned of our beloved Dottie and Chase (below) that hangs in our kitchen. 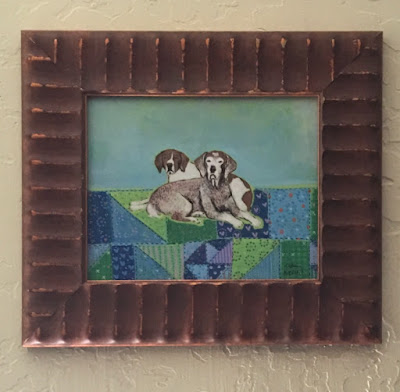 The picture below was taken during one of the first outings hubby took him on while I was at Sew Day near by.  I miss those in person creative times and I'm sure Rudy misses the forrest. 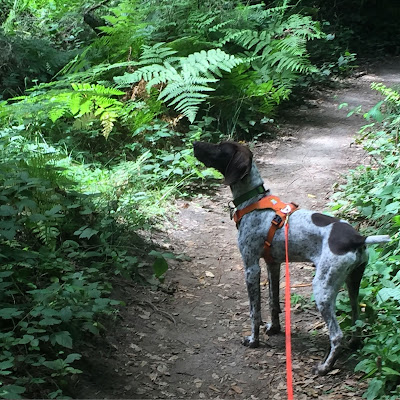 We're fortunate to have a back yard and regular visits with our grandpup who we refer to as his "cousin" .  They are so compatible and bring out the best in one another - true BFFs. 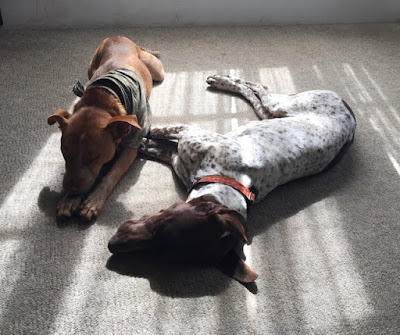 Before the Shelter in Place, Rudy was invited for a play date to hang out with his sister.  They connected like not a day had gone by and were so cute together, in an exhausting kind of way!  It was great to see how well she was doing and that we had made the right decision.  This time they were actually sitting still for the picture- with the help of a treat - but hey. 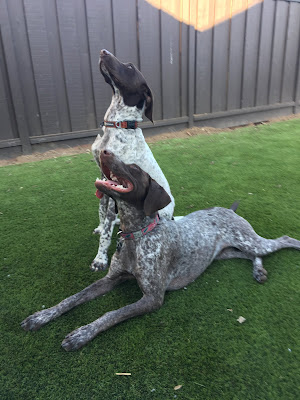 Rudy has settled in to be my sewing side kick with what little sewing I've done lately.  He even tries to snuggle when I'm laying in bed doing handwork.  He's pretty good at photobombing like our dogs that came before. 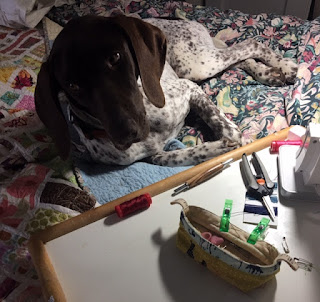 It's hard to imagine that our adoption anniversary is fast approaching.   In the span of 40 years that hubby and I have been together, we've only had four other fur babies so when you think of it that way, a year is a just a blink.

Well, if you made it this far, thanks for sticking with me in my attempt to recap.  See you soon for "What I did Last Summer Part Two".  Happy Stitching, Karen
Posted by CapitolaQuilter at 7:51 AM 6 comments: