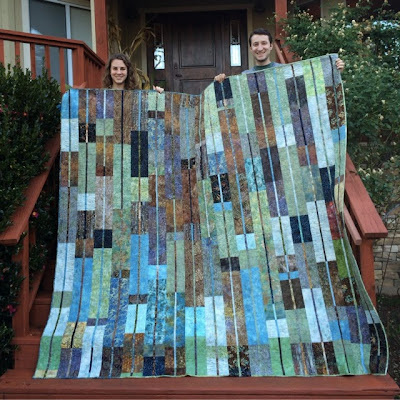 With the help of late night marathon sewing at our recent SBAMQG Quilt Retreat and a bit luck, my FAL Q4 project Redwood Grove has been gifted.   I'd hoped to complete it there but instead brought it home with about 1/3 FMQ done and kept going. 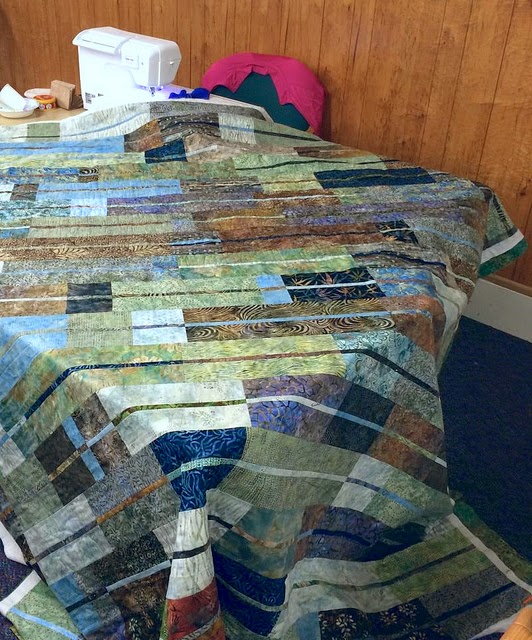 I managed to enlarge and finish the wedding quilt for my niece and her husband and deliver it in person at Thanksgiving - well before their first anniversary and in time for Finish it Up Friday and Whoop Whoop linky parties the aLYOF November goal and 2014 FALQ4 deadlines. 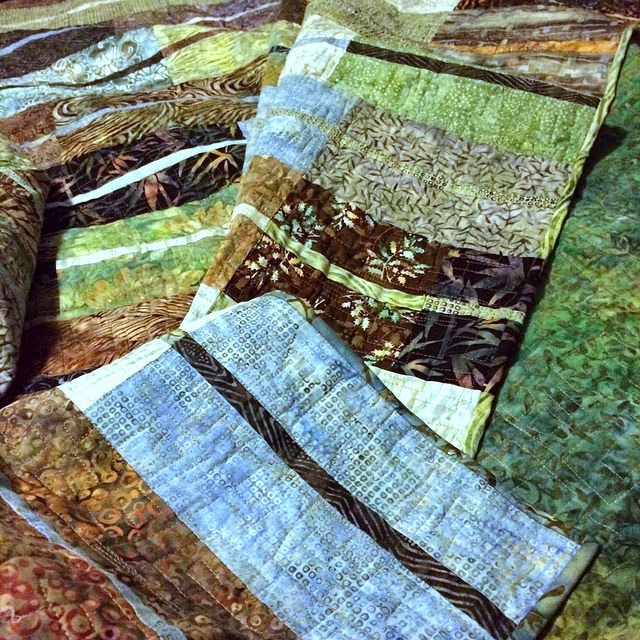 For the binding, I used two similar fabrics (the green and the blue/green) that were in the quilt and included a pop out of the dark bamboo fabric in just one spot.  Also tossed here and there in the quilt you'll find some brighter rust because as much as I tried to narrow the palette to a cool calm one they had requested, I couldn't help myself. 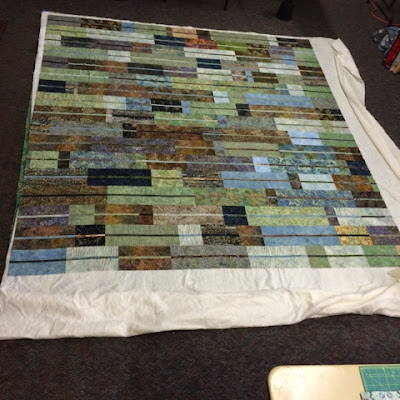 Basting at 3am on the floor of the workroom while most of the other attendees at the retreat were fast asleep.  Fortunately there were a couple of other hard core worker bees still at it and they were nice enough to help me manage this beast.   After adding two rows to the side and spicing in another 12" to the bottom the final size is 91"x 87" to give a better drape on their queen bed.
Working from stash felt good and I have quite a large batik collection that I still like despite not having added to it in awhile.  To give their quilt a touch of sentiment and cousins loving, I incorporated the fabrics that I used for the two quilts that I had previously made for my sons. 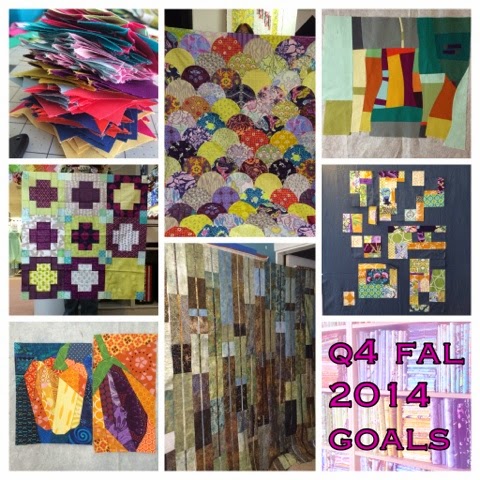 My Q4 FAL 2014 goals are now at 2/7 with the finish of my IGmini swap quilt.  It'll be mailed off in a few days and I had better remember to take a photo of it bound.  This shot is from the retreat (matchstick at midnight) as well and I just love the lashes of Aurifil that were created. 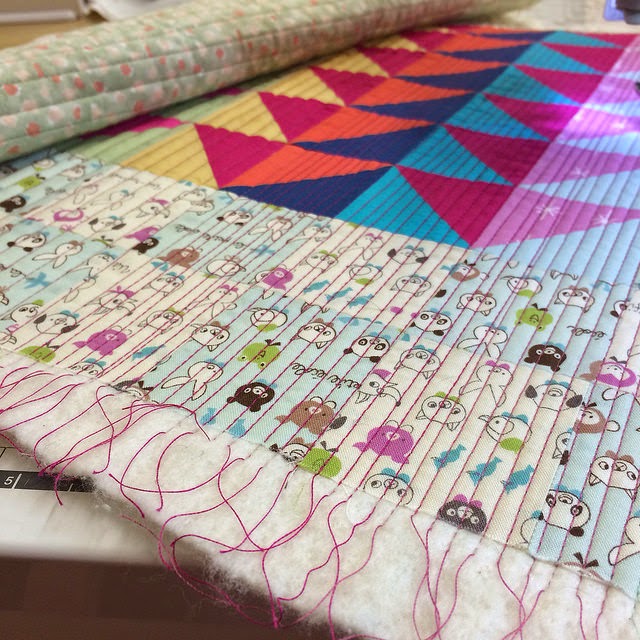 Posted by CapitolaQuilter at 11:14 AM 7 comments:

Surrounded by Talent and Inspiration

Left to Right: Victoria Findlay Wolfe  - let us take a peak at her new book, it's amazing!,  Anita Grossman Solomon - made me blush when she recognized me and told the audience of her open studio about the Old Italian Block quilt I made,  Jenny Doan - as perky in person as on youtube- and Karlee Porter  - entertained beyond words at her graffiti quilting demo and posted the most adorable obligatory selfie on her blog where you can find me waving in the far left.
I knew that going to Houston Festival for the first time would be overwhelming but wasn't exactly sure what to expect.   Once I caught my breath from being star struck - I took off my shy hat and became a full blown Fangirl.  How could I not?  Everyone was so incredibly sweet and happy to pose (or at least they put on a good act).
Above: Alex Voronelli and Elena Gregotti of Aurifil with Stephanie Ruyle and I.


The Houston MQG had a wonderful meet up on Saturday night (thank you ladies!!) and I won this FQ bundle along with a huge swag bag that barely fit on the plane!  I was one of "those people" with a shoulder bag stuffed bigger than my carryon suitcase.

I turned my sister on to Oakshott - she's now as hooked as I am so we "had to" stop the Pinwheel booth and pick up a little more each day at the show.


The weather was so nice with a gorgeous sunset from our hotel room without fail every night.   We also got to visit with my niece which was such a treat. 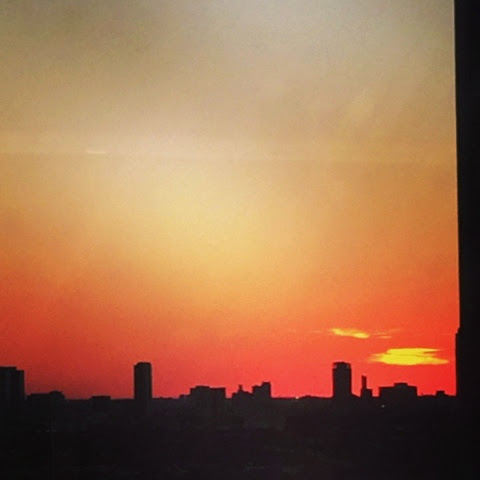 Back at home, we had the first rain in seemingly forever on Halloween.  That didn't stop the fun for my adorable grand daughter.  She was a wee Baby Koa last year with her Pond parents too little to remember, but this time she got to toddle all over and even got her picture in the local newspaper.

Part 2 will include actual quilts from the Festival, I promise!

Between unpacking from Houston and packing for our MQG retreat tomorrow there hasn't been a ton of sewing but I did manage to gather my WIP projects to take along with what just may be another challenge under the wire entry for Michael Miller Cotton Couture:


My hope is to recolor a recent QDAD design and use the fabric above to bring it to life.
finish up the Redwood Grove wedding quilt before Thanksgiving, the IGswap mini by mailing deadline and also work on my block contribution for QuiltCon charity. 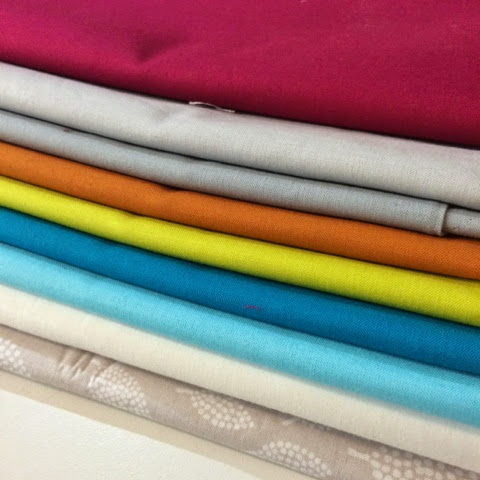 Linking up to Lee at Freshly Pieced for WIP Wednesday.
Posted by CapitolaQuilter at 10:32 AM 7 comments: