March 16th was the 5 year anniversary of my Blog.  I usually post exactly on that day but this time I'm throwing in a huge finish that's worth the wait.  "Reflections" is a bit tardy so that makes it all seem intentional with a touch of serendipity mixed in for good measure.

Blocks made by BeeSewcial mates Stephanie, Leanne, Melissa, Diane, Hilary, Marci, Felicity, Kari and Debbie for the July 2015 "Reflections" challenge has finally become a finished quilt.   Thrilled is an understatement and the inspiration palette in the background made for a fun shoot. 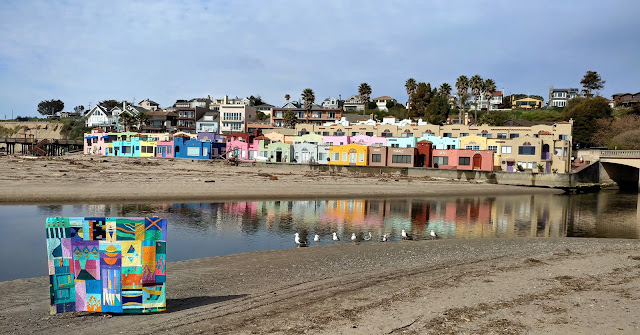 So much so, my friend Sanda walked down for an encore session the following day when the wind had settled so that we could capture the colors mirrored in the water.  Be sure to check out #beesewcial and the makers on Instagram and their blogs to see their creative and highly skilled work: 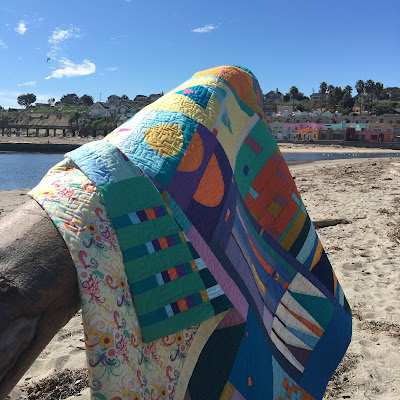 Because of the recent storm, there are many more props to use on the beach.
My instructions to them were "your block does not HAVE to be literal, but it CAN be.  It's as much about the relationship of colors and/or shapes within the block.  A change of value or scale from top to bottom or side to side. An exaggeration or distortion that the word Reflection evokes.  The transition doesn't have to be in the middle or a hard horizon but there should be some design element that varies within the composition."
During a member spark week of QDAD, I took this photo of the Venetian's in Capitola Village for the inspiration.  It was a favorite and yet the designs I came up with fells short.  Fortunately, the concept and palette found a successful place in my creative journey when it was time for me to be queen July 2015 with the BeeSewcial challenge.  Can you blame me for freaking out a little about sewing these together?  They are each an individual work of art.

This is an early version of the block placement at one stage of the process.  Pretty much the entire four day retreat in October was devoted solely to getting it right and every night I would stay up late convinced that it was ready to roll the next morning only to wake up and change my mind.  Even knowing there is no one right answer to the puzzling question, it was difficult to commit.  One move would domino a series of other moves.  My guild mates marveled curiously at my flighty obsessiveness I am sure.


It's no secret that Pat Bravo is an all-time favorite designer of mine.  Isn't this fabric from her Sugar line the sweetest backing?  Every time I repositioned while putting the face binding on I'd get a peak at the front and get all giddy about how well it complimented the colors.  There was exactly enough yardage in my stash to fussy join the print at the seam too.


My friend Pat generously lets me use her Handi Quilter Avante to quilt with.  I went with a random-ish pattern that has sort of become my signature quilting.   With so much going on in the quilt, an overall seemed appropriate.  My go to color of Glide thread in Celery was a no brainer with the range of lights and darks.  Bamboo batting for the win.
She also has the most gorgeous hardwood floor and a stairs that allow me to take flattering photos from above with ease.  The lighting exaggerates the texture which can be fun but terrifyingly revealing at the same time.
It was the perfect project to finish during this weekend's "Sew and Stroll" mini-retreat because I could sit and visit while hand stitching and then take advantage of all the hands to hold up the quilt later for the shoot. This group picture was taken by the nicest stranger who interrupted his slice of pizza to offer and help when he saw me struggling to extend my arm out for selfie.  That one was worth a good laugh but nothing I'd ever share! 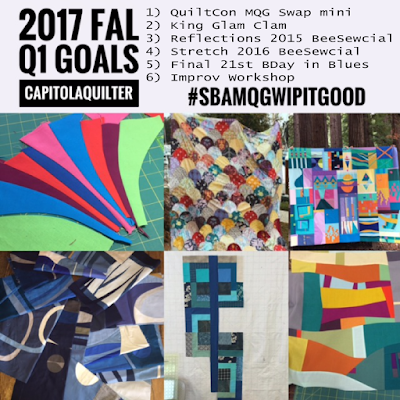 The FAL Q1 is coming to an end and it thrills me to no end to have a second quilt that I can call finished.  Our MQG challenge to complete WIPs runs longer so there's still hope for checking more off that list.

Now on to making a quilt from my BeeSewcial Stretch blocks from 2016 and the most recent set of  EYES for 2017.   Stay tuned. After much procrastination and fear that I wouldn't be able to do them justice,  I'm on a roll.
Posted by CapitolaQuilter at 1:38 PM