So excited to have finished and gifted Fan Dance to my niece and husband who are expecting their first child soon.  Bonus means I've got another project to check off the 2017 Q2 FAL.   It's a good thing that I shared it at our guild meeting because somehow I neglected to take it on a photo shoot. 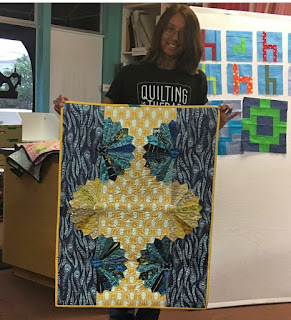 Being the very crafty mom-to-be that she is, the Baby Shower had a onesie station set up for painting, stamping or drawing so I did a butterfly: 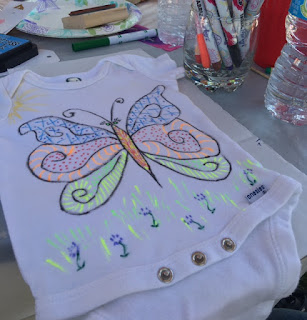 As QuiltCon 2018 registration approaches, it's a reminder of workshops taken and techniques learned from previous years.  With only 3 or 6 hours of actual production time - including instructor demos, it's understandable that I don't have many "finished" projects to show.  This Anna Marie Horner's Fan Dance quilt started in 2016 is an exception to the rule for sure.

I had originally auditioned the reverse color placement with blue in the center.  Although there's no one right answer to the design decision,  I'm glad to have gone the other way. 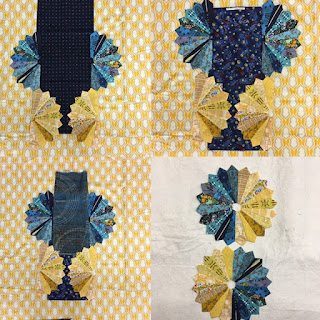 Clever, flexible patterns appeal to me.  Taking classes and posing for a fan girl photo with my sister, far left and AMH center is tradition.

Limited time doesn't mean that I come away from the classes empty handed though.  The skills gained and inspiration instilled from teachers like Rossie Hutchinson,  Angela Walters, Libbs Elliott, Christina Cameli Victoria Findlay Wolfe, have stuck with me.  Their influence is in my work moving forward.

I'm also reminded as I type that I never did a 2017 QConEast Savannah recap blog post which is both crazy (because it was epic) and not surprising for the same reason.  When "things" are too big to easily convey I tend to put them off until I feel I can do them justice - basically for: forever.  The same way you hoard your most precious fabric waiting for the perfect design to present itself, kind of like that. 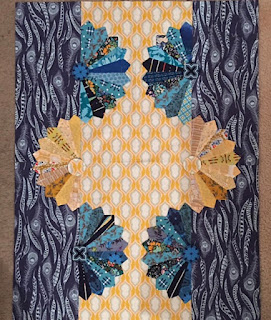 I also had fun auditioning the blue and yellow appliqué circles.   In the final finish, it's hard to see the X and O's I put in the centers of the fan for a little bit of hidden hugs and kisses. 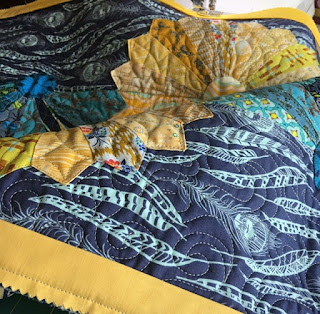 Fortunately, a stash of solid jelly roll provided binding to complete the project. 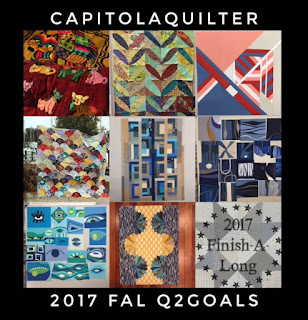 Posted by CapitolaQuilter at 10:46 AM