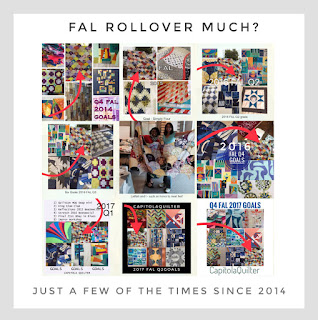 In September of 2014 our MQG chapter had Latifah Saafir come to teach a Glam Clam Workshop followed by an open sew for a total of 12hours non-stop (exhausting) fun.  Thanks to the prep she had us do ahead of time and the fact that I had chosen the 12" template, I was able to finish the top by months end.  Why it has taken over three years to quilt, bind and put on my bed I have no idea.

I thought it would be amusing to compile a mosaic of all the times it made an appearance on my FAL goal list but after tracking down enough to fill the grid I decided my point was made and never actually got a formal count of how many times it rolled over.  Most importantly 2017FALQ4 Goal was the last, whoop whoop!


We recently had a cold spell so I just placed it on top of my X-Plus quilt and let it hang over.

Keeping with the scrappy spirit of the quilt and because doing any FMQ controlled and repetitive is something that does not personally appeal to me as a process, I chose a bunch of different motifs inspired by the fabric or at whim.

One of the best things about hand-stitching the binding on quilts besides the final bonding moments is that you get to have something portable to take on outings.  Normally my quilts aren't so huge!  I had to stuff it in the stroller basket and it wasn't very discrete pulling it out to work on during Pre-school time at the library.  Coincidentally one of the books being read was about quilts and fortunately, my granddaughter was fully engrossed in the activities and didn't need my assistance with her crafts so it ended up worth the effort.

Three holders with outstretched arms on a windy day at the yacht harbor captured the flimsy before trimming the bottom edge.
When I made the choices of which fabrics to include for the clams there was a narrower color palette at the beginning.  Expanding to quite the scrappy eyeful in the end they all have something in common - I love them.
Cutting into your favorite stash can be hard but add to that the odd shapes that are left, it was pretty traumatic.  I still haven't dealt with the scraps.
Had I only known it would be three years before finishing I probably wouldn't have had such a smug smile in these photos!!!
It has been fun watching so many variations of the Glam Clam shared on social media and I'm happy to have mine join the ranks.  One day, maybe in the next 3 years I'll take it out for a proper photo shoot.

Started: September 2014
Finished: December 2017
Size: 100" x 100"
Pieced by me on my Babylock Symphony, Aurifil 50wt
Quilted by me on my friends Handy Quilter, Glide thread
Batting: Bamboo
Posted by CapitolaQuilter at 10:03 AM