Here are the two finished blocks that I made for Hilary's "Layers" theme for March BeeSewcial.  Yes, they were technically created mostly in April but aside from that little fact, I'm really thrilled with everything else about them.

When she released the challenge details (posted here) I immediately thought of Tide Pools and knew I wanted to use that as my improv with intent spark.    It also made me want to go down to Natural Bridges to see some in real life because that hasn't happened in years.

The other thought that came to mind was the workshop with Maria Shell and the Maximalist block that I made for Leanne (pictured below, blogged here).  Replicating it would be - insane - but I do think that it has a very layered, woven look and wanted to capture the essence of that again.

Sometimes when I read the challenge I need to let it percolate but this time I wanted to jump right in.   For consistency,  Hilary listed names of specific solids and asked that we use them or similar.  Without a Kona color card and because my stash is a big heaping mess, I picked up School Bus and Flame during break at the March guild meeting which happened to be on sale to members (thank you Hart's Fabric).

Can I just say that the shift in lighting was THE worse for messing with my mind and composition decisions with these blocks.

There were moments when the same two fabrics next to one another went from being too high contrast to indistinguishably blending in.


I pulled stash based on the list she had provided of the peeling paint image by Richman and from looking at the blocks that were made and posted on IG.

Because life somehow got in the way all of March, I didn't get a chance to really sink my teeth in this project until the very, very end of the month.  The upside was that I got to take part in #fridaynightsewalong on April 1st which is always fun and encouraging.

Here is the final crop of my first block.  Don't you love how I had to push aside to make a space on the cutting table large enough to fit the ruler?   Improv is not a neat and tidy process for me.

I made this QDAD directly influenced by Hillary's work and rather than try and bring it to life (which I hope to do as an entire quilt) I printed it out for additional inspiration and cut freehand. 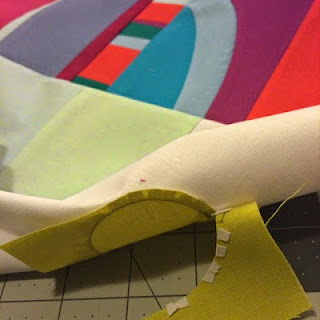 You should definitely read this Curves Ahead post by Stephanie if you have an interest in trying the freezer-paper-less technique of the 6 minute circle.    She does a great job of taking you step by step through an illustrated tutorial of sorts of her process.    I wish I was that together to share mine with you here.

The Roxanne's glue that I bought and not used at Glamp came out of the package and made its debut for this block.   I have used a glue stick and a paint brush with Elmers like on the block shown below made for Di from April 2015 "Circle/Ovals/Curves" theme (blogged here)

It's hard for me to switch gears or have a lot of props when I'm in the improv zone plus keeping track of where I keep the "other stuff" that I use only occasionally is also challenge.   There are extreme shapes that take extreme measures and therefore worth the effort.

Carefully clipping the seams as Stephanie does was the hardest and most time consuming step and bothered my hand.  I even tried several types of scissors.

When it was time to clip the second circle I was warmed up but it still felt awkward and I was annoyed enough to remember why I hadn't done it for a year.

The first block didn't include the optional bit of black and I wanted this one to.  Auditioning (late night lighting) I crowd sourced opinions on IG about it as well as using blue again in the lower segment.  I was concerned that it might distract from the focal blue areas but really wanted it there.

Next step, I eyeballed the target shape from the section and cut it with my regular rotary.  Dreading the clipping task it dawned on me to use my pinking blade.  It was a "what if" moment that paid off big time.  It was so easy to use my scissors to snip at each (or most) of the indents.
Once I pressed the seam allowance over I could determine the few areas that needed to be snipped away and took care of those.  This was so much less stressful for my hand and makes the technique doable.
This shot shows just how much "one thing leads to another" applies to the way I approach improv.  The placement I decided on had gaps in the fabric below - which is a no no.  Building out as needed (shown above) gave the final results (shown below).
If you look back at the first photo of the entire block, you'll see that I added a rectangle-ish shape in the upper right of the dark grey to tie in the one at the bottom.  The other repeated shape isn't as obvious but the large solid blue in the bottom corner should look similar to the shape of the tiny triangle-ish shape once it is sewn in.  At least that's the plan.

For those of you not in the BeeSewcial group, you can still take on the monthly challenge and see what others have shared on IG with the hashtag #inspiredbybeesewcial

Thanks for hanging in there with my long winded post.  To reward you for making it to the end I'll leave you with this:  a bit of accidental humor.   Taking a photo of the underbelly of the block to show the construction is something that I do often.  I was innocently compiling a mosaic of the to blocks front/back and came up with this sinister creature!

And on that note - happy stitching.

Posted by CapitolaQuilter at 2:37 PM