TempQuilt19
I knew I had to join in with the #tempquiltalong using my Improv Abstraction block when the prepping posts started popping up on my Instagram feed at the beginning of the year.   A good chunk of 2019 is now behind us but hey - look, I'm keeping up!  The picture above is the 28"x98" segment to prove it - that's 112 days done! Shocking but true.

January came and went without a speck of progress so I almost gave up on the idea until it occurred to me that bringing my parts with me to QuiltCon Nashville in February would be the perfect project for the Open Sew sessions I had signed up to attend.

Each block represents the temperature of the day with the High on the left and Low on the right.  The orientation of the parts doesn't have any significance which makes the freedom of layout more fun as I build it.  Each strip is 2 weeks starting from top to bottom. We had some weird weird weather and I needed three of the coldest bracket almost immediately.
Comparing the degree brackets of other participants was helpful but our weather tends to be mild so I adjusted the most likely temps (shown in bold on the chart) to get variety. Because I promised myself that I would sew from stash and use prints the "color key" is much less obvious than other quilts out there.  Good thing I like scrappy.

With a set number of blocks I also had to take into consideration what made sense for a layout plan.  365 days doesn't exactly divide evenly into everything and rectangles instead of squares makes the quilt math trickier but fortunately 26x14 uses all but one and measures to 91"x98" for our bed.  The December 31st block will be the label on the back.


You might be asking yourself how did I calculate how many rectangles to cut of each - well, I didn't.   Not in the least.  It's stash and it needs used up - so I'm expecting to have lots of left overs as a head start to another project in 2020.

It's tradition. Every year we walk down to the beach and our granddaughter participates in the Easter Egg Hunt in Capitola Village.  The colors of the Venetian match perfectly as a backdrop to the scattered pastel shapes in the sand.  We love it. 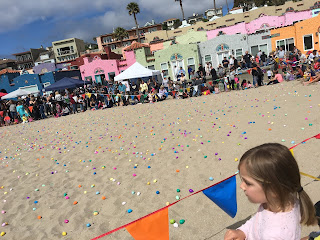 Speaking of color - or more accurately lack of- I'm transitioning to my natural hair color.  It will take about a year and a half or two to grow out but I wanted to take the plunge with a sudden drastic change.  I'm adjusting to it well and excited about the end game.

Posted by CapitolaQuilter at 6:09 PM