Duck and Cover & Sewing in Circles

Those of you who have seen my finished quilts on flickr know that I like to take a picture on my front porch. I'm sure my neighbors are use to it by now and I have my kids pretty well trained, they no longer roll their eyes when I ask.  In fact, they have the routine down so well I don't even have to direct anymore: front, back and partially flipped to show both.

Thing One & Thing Two meets
Side One & Side Two
Usually it's just a peak of the corner but in this case it was more like a 50/50 flip and I was cracking up by the way my son squatted down to stay out of the picture. Duck and cover is a bit hard to do at nearly 6ft tall. I teased him that I was going to blog about it - so now you know the back story to my favorite shot of this quite possibly over photographed baby quilt.  Progress posts here and here.

The baby arrived safe and sound I'm happy to report and it's a BOY.  Even tho the quilt was designed for either, if it had been a girl I'd have missed a rare chance to do it up pink and frilly so I'm kind of pleased. 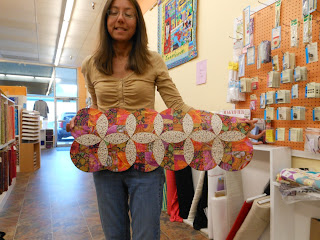 When I first made this runner the most difficult step was drawing the circular line in chalk. This time I used my new Frixion pen and it worked like a dream - so much less frustrating.  Although having ink with the ability to disappear and reappear is kind of disturbing -  I'm sold.

When my son's girlfriend admired my runner a few weeks ago, I suggested that she make one for her mother for Mother's Day. She's only hand sewn pillows before and had never used a sewing machine - I was SO excited to be the first to teach her.  She loved pulling fabric from my stash and went on and on about the fabric: my kind of girl.

Because using a rotary is an acquired skill, I cut the strips and she stitched the four patches.  Pretty impressive for the first time behind the wheel and my new Baby lock Serenade with the speed control, needle down and other handy features made it nice too.

It's been years since I made the first one and about a year since I made this Hawaiian version and somehow I'd forgotten how awkward sewing in circles can be. Like manipulating the curves of a winding road when you've just barely learned to drive. What was I thinking!  After a rocky start with the first two attempts, she had it wired and whipped out the rest staying right on the line -I was truly impressed.

Linking up to Sew & Tell Friday - Go check it out!

Posted by CapitolaQuilter at 6:30 AM