I'm so fortunate to be part of the South Bay Area Modern Quilt Guild and this weekend we are holding our second annual Retreat in the beautiful Santa Cruz redwoods.  Planning and plotting with my committee-mates has been a blast although I'm not very good at secrets so it'll be nice when I can share some pictures of what we've been up to.

This is the second time Anne at PlayCrafts quilt has been on flickr Explorer in MY photo pool.  Her Broken Herringbone tutorial can be found here. Last time it was her Mod Pop picture from the 1st annual Retreat.  I had just read this post on Live a Colorful Life about a similar thing happening with a photo her daughter-in-law took.

Have you been following along with the major eye candy of Fall Quilt Market?  Timing could not have been better for me because I won not one but two link-ups recently and have gift certificates to spend!  Thank you sponsors and hostesses: Pink Chalk  from Leanne at She Can Quilt / Finish It Up Q4 and Fat Quarter Shop from Katie at Swim Bike Quilt 100 Quilts for Kids.

My last two posts have been reruns for my followers who've seen plenty of Ring Around the Briar Rosies #36 and Tassels #25, but hopefully interesting to anyone new who might be popping in as part of Blogger's Quilt Festival.  Be sure to continue to check out the linky party at Amy's Creative Side because it is a wealth of inspiration. Voting opens today! 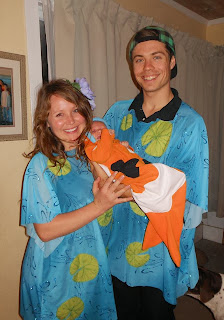 I was so happy to be in charge of by baby grand girl's first Halloween costume.  No trick and all treat, this little Koi and her Pond parents stopped by last night.  She's sweeter than candy with all her adorable expressions even after a big day out and about. 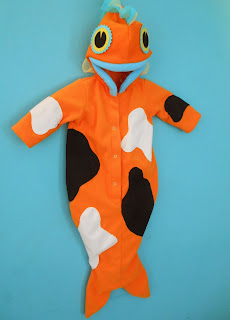 Originally I had planned to start from scratch and use a pod/bunting pattern but I found this 0-6mos Pottery Barn goldfish at the thrift store and modified it instead. 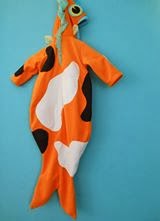 The pond ponchos were embellished with a couple dozen lily pads made from green stash flannel drawn on with a sharpie and then sewn by machine.  I even found a lotus flower in my gift wrap box and attached it to a barrette (with green hose tape of all things!)  I forgot to take a picture of the coordinating burp pad but heard it came in handy.

Time for a November LYoF goal to be set and I'm choosing my x-Plus quilt. Here's the top - next time you see it I'm hoping it will be a completed quilt: 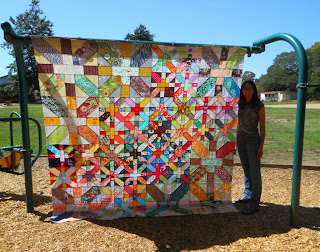 Posted by CapitolaQuilter at 10:18 AM