Two out of Six.  Not Bad.  Especially when you love them both.  Thanks to the boost from Finish A Long, the WIP list is chipping away.

Typically, if I drop everything to make a project that has no deadline or specific recipient in mind, it will just sit and collect as a UFO until the purpose presents itself.  This time, I put the mini on my FAL Q4 list and got it done! All I had to do was sew on the binding but that step has tripped me up big time in the past. 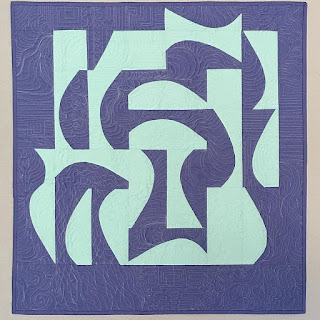 Rachel of Stitched in Color had a challenge to create and share 30 designs on IG  Participating in this sparked a new found interest and if I may say so myself, a batch of successful future quilt prospects. 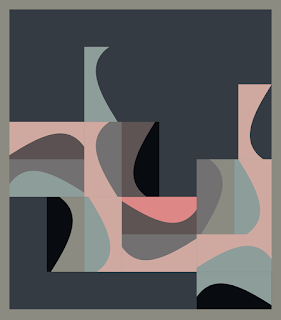 Taking one basic shape and tossing, turning, cropping and filling. So much fun! 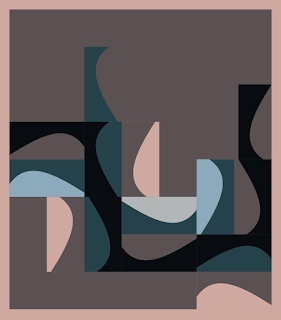 And when I couldn't get it out of my head I recolored it to emphasize different areas. 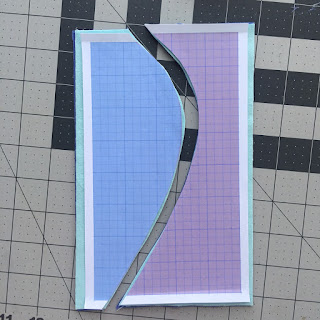 I oversized the fabric and used the printed shape as a template guide with the intent of having them cropped slightly different rather than uniform.
The before sample pictured below on the right sewed together accurately but not all of them did.   The freedom to not worry about wonky or having even edges is worth the trimming step IMO. 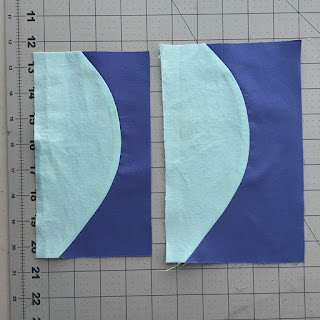 Using the mock up design as a general idea I played with layout and deviated from it and even included a partial block in the upper left.

Although I was happy with the shapes there wasn't quite the graphic look achieved with the two color version compared to the multi-color mock up. 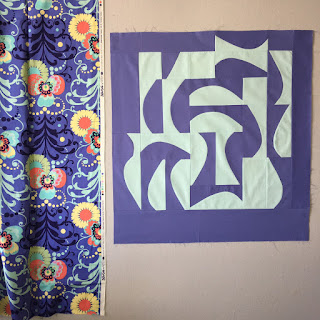 Surrounded by the darker blue was just the ticket.  It allowed for the edges to escape out in areas expanding the movement.  I also added a couple more and chose to vary the outer width offset as I saw fit.

There were shapes that jumped out like the imperial walker from Starwars and silhouette of a half vase in the lower corner as well as bending body parts throughout. 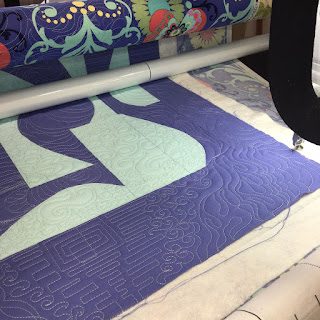 The absolutely perfect Amy Butler stash for the backing made me a little giddy when I discovered it.  I had thought for sure the odd hard to match periwinkle blue would be tough.

My friend let me use her long arm so I kept the whimsy going and doodled.    The creation of this mini brought me unexpected joy and reminded me how fulfilling designing and bringing to life a quilt can be. 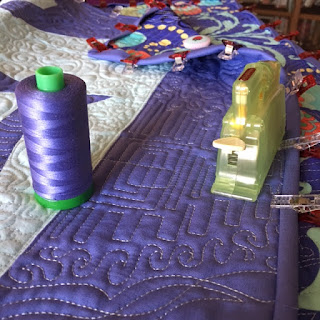 The binding finished it up as a completed goal for FAL Q4 (posted here).   Usually I choose projects that take a lot of work to get done so I was glad to have been so far along with this one for once.  Aurfil thread stash also delivered.   The 40wt was fine because the color match was perfect.

Linking up for the party HERE.  Be sure to check everyone out and go give them a pat on the back.

The other finish I managed to do was to make something instead of just stash the stamped fabric that I had created during a play date with my friend. 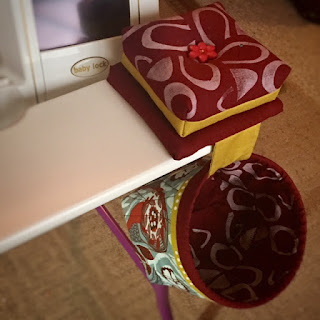 During a weekend sew-away with several other friends, I made a pin cushion and thread catcher.  Truth be told, I still toss my thread on the floor and stash thing like thread, extra bobbins and a seam ripper in it.  (linked up my finish via IG). 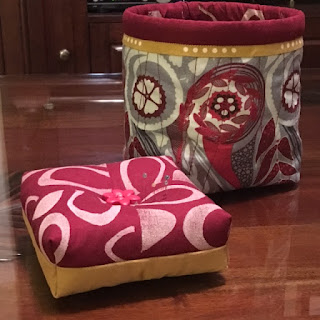 As for the other four goals, here's where they stand:


My Reflection BeeSewcial 2015 blocks are now - drum roll please - A TOP!!!  and an amazing one at that.  The puzzling on this was pretty much the entire focus at our guild's 5th annual retreat.  Four glorious days in the redwood.  Check out #beesewcial and #inspiredbybeesewcial if you're not already familiar with my talented mates. 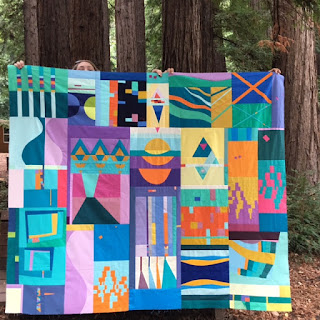 My Stretch theme BeeSewcial 2016 blocks were not so lucky.  They will have their turn soon and I'm feeling now that I have the other under my belt it'll be less intimidating.  The unified denim jeans palette in theory should be easier than the last.

The final two unfinished goals Glam Clam from an old workshop and my Dresden blocks from a more recent one were not touched.

So there you have it!
Now to start compiling my 2017FAL Q1 goals because the linky party will be opening in a few days!

Happy Stitching and thanks for stopping by.

Posted by CapitolaQuilter at 10:26 PM