What better way to begin the New Year than with a #BeeSewcial theme of Resolution by Stephanie, Spontaneous Threads.    Using the color palette and inspiration from the pastel landscape of icebergs and Ted Talk by artist Zaria Forman,  she asked us to create a panoramic block reflecting our personal resolution for 2017.   How appropriate it is that I'm finishing down to the wire in the final days of the month given that I've chosen: "Avoid Binge and Burnout".

Not the eating disorder but the same unhealthy principals I suppose.  My resolution is to be mindful of impulses.  Creative enthusiasm that leads to (thankfully momentary) Flat Line.  It's hard to explain or pin point because some of the most enjoyable, successful and satisfying makes of 2016 fall under this category.
I don't know why I thought the breeze and harsh sunlight would be any easier to photograph.  But a scenic block deserved a shot at a shoot.
The end result was less scrappy than I had originally planned.  The movement with shapes seemed to illustrate the theme and combining in a wide variety of colors felt like a distraction.
There are however slight changes in the aqua lines that are hard to capture.

Sound familiar?  Drop everything and sign up for, be part of, buy this, attend that resulting in deadline panic, self doubt, broken connections, missing sewejo etc.

Recognizing that when I return from a retreat or workshop and my sewing supplies sit unpacked might be a sign.  Acknowledging that the pretty new bundle of "I can't live without" fabric line sitting on the shelf manifests guilt.  The bursts of IG posting, commenting, blog reading and writing followed by silence and the desire to literally do nothing.

Resolutions are to me a time consider a better way to be.  This early layout layout felt too controlled and direct for the message I wanted to convey.

I'm not saying that the price of pulling an all-nighter when so inspired then needing a nap for the next few days or laying awake with insomnia because the how-to and what-ifs about bringing a design to reality are running through your head isn't sometimes worth it.

Writing about this, reminds me of the love/hate relationship I have with the convenience of things like Netflix's watch next episode, Automatic Bill Pay, Amazon One-Click Checkout and my phone alerting me of - well just about everything.   Seems smart to park myself somewhere shy of blinds eye.  Let's call it "Pick and Choose".


The straight thin lines can also represent being on even keel while the broken jagged ones suggest the state of being overwhelmed and pulled in many directions.  A sense of disconnect in an attempt to connect,  a byproduct of social media. 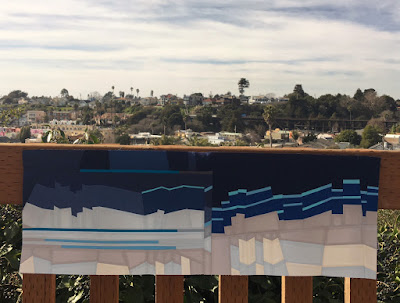 The process was very reminiscent to when I created the Transition block, but less colorful.  Quite often themes will carry over from one challenge to another.   Rarely do the ideas work themselves out in just one project.

This has been a really good exercise.   Other than the usual vow to use stash, organize my sewing space and finish up WIPS, I don't typically make Resolutions.  After all that requires insight and assessment while my expertise is more along the lines of procrastination and denial.

I hope you'll take the time to visit Stephanie's thoughtful blog post describing the challenge.  Much of what my bee mates have written about their blocks resonate closely.  Here are a few: Marci's,  Felicity's , Anne's , Debbie's, M-R's , Silvia's and Hilary's.

As always, everyone is encouraged to sew along with the theme using the hashtag #inpsiredbybeesewcial on Instagram.

Check back soon because I will be revealing the February challenge as queen bee.
Posted by CapitolaQuilter at 1:56 PM