I've been in several secret swaps both virtual via Flickr, IG and Facebook group based and also with my local MQG.  They are one of my favorite things to do because despite the nerve-wracking-ness of wondering if they will like it or if they will flake and drop out just when you've tailored it specifically to their interest,  the mystery and suspense if pretty darn fun. 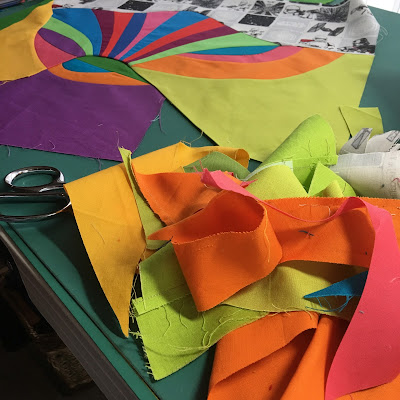 Thanks to Ginny who mailed me some scraps left from a project, I had just the right background to use.  I wasn't sure if I should reveal it in fear of giving away the fact that my partner was a Star Wars fan.  But it was really hard to share progress on IG without doing so (another aspect that I find entertaining). 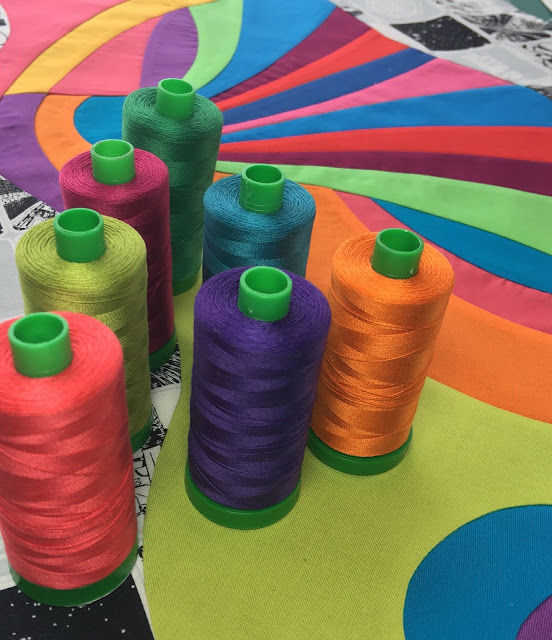 I figured that there are a ton of fans out there and it would hopefully only narrow the field.   More choices to be made - the quilting on such an eye full.  The aurifil 40wt in a variety of colors seemed like a good choice to carry the color out a bit into the neutral. 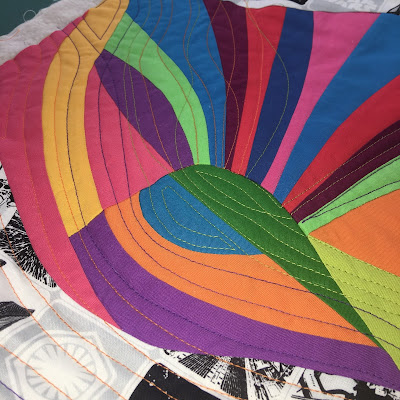 Combining intentional echoing with periodic bits of shapes and freeform wavy lines is the direction I ended up with using just four of the spools, purple orange, green and blue.  I also made sure that in some areas the thread was high contrast and in other areas it blended and served as texture.

Experimenting with a heavily pieced top layer to see if I could pull it off.  Up until now I'd been avoiding that due to bulk but now that I know it can bee done it opens a whole new freedom for designing. 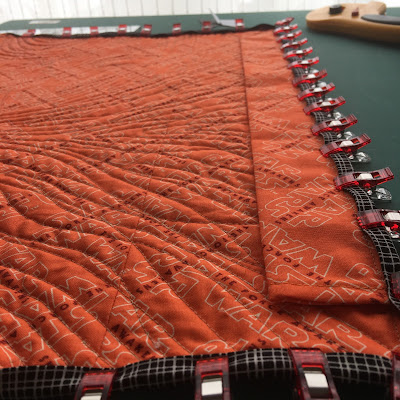 The orange fabric for the backing I picked up while at a weekend sew-in with friends during our field trip to the store.  Sewing in the sleeve means one less whip stitch by hand and I think it looks nice too.  Yes, there are WAY more wonder clips than necessary.  I get easily carried away. 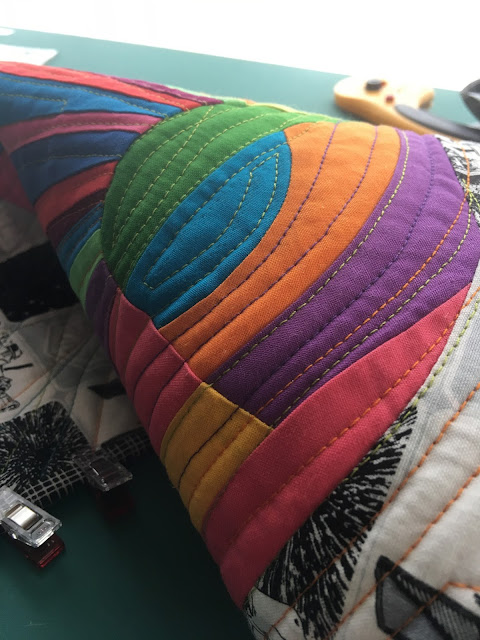 Because I've been so spoiled with the use of my friend Pat's longarm lately, quilting on my domestic felt kind of foreign at first.  Since there was so much going on visually within the quilt itself I wanted the binding to play a supporting role.  I did audition rainbow stripe and colorful prints but didn't care for it. 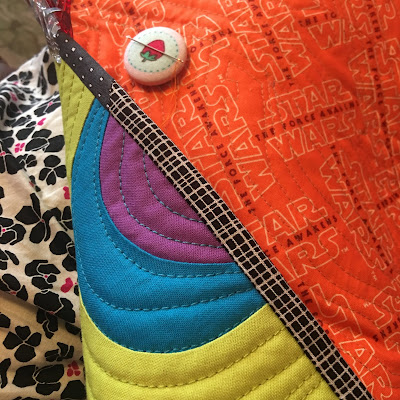 There was a piece of left over Ink & Arrow Fabrics Pixie Square Dot binding from my Dare to Fly quilt so I positioned it to match up with one curves and wrapped it around the upper corner.  I'm really pleased with the end result and will find out a week from today at the meet up if my partner agrees.  If it's a little too unique, let's hope they have a decent poker face so I won't be crushed. 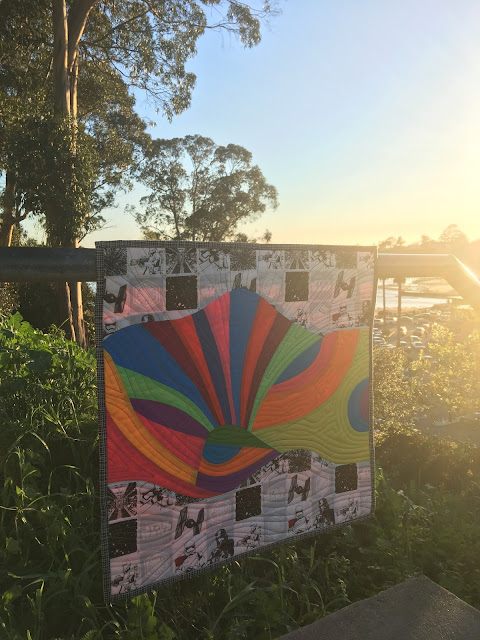 We've had a ridiculous amount of rain.  There was a break in the storm and I headed to my usual Depot Hill spot overlooking Capitola Village.  A mini is a breeze to shoot solo.  Sunset however created lighting challenges as you can see from my first attempt pictured above. 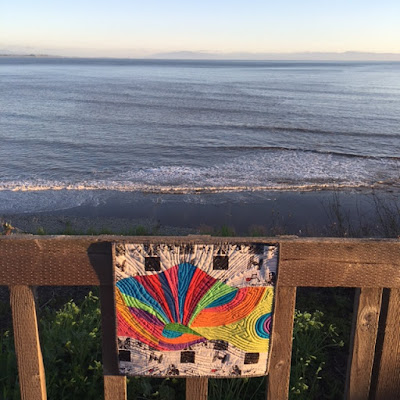 The really harsh lighting in the picture above shows an unflattering cast of shadows - let's just say that if the quilt was a person, they'd be squinting.  The one below has a nice setting and I did a slight dodge/burn to try and even out the exposure. 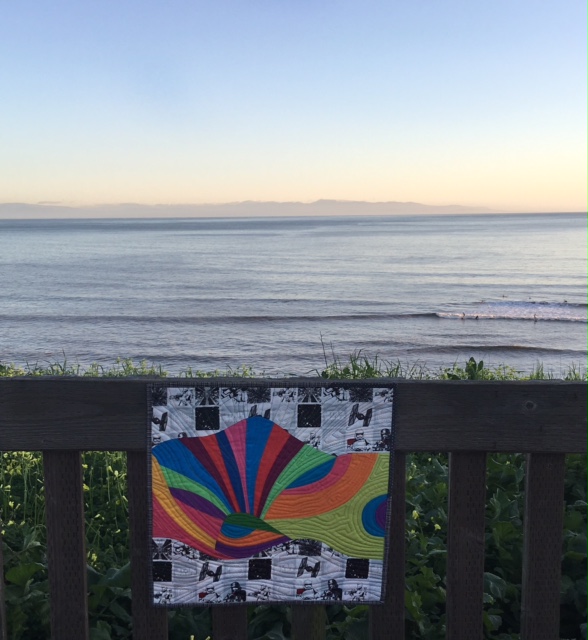 I walked around to the side street to capture the shot at the top of the post and then hung out long enough to snap this one below just for fun. 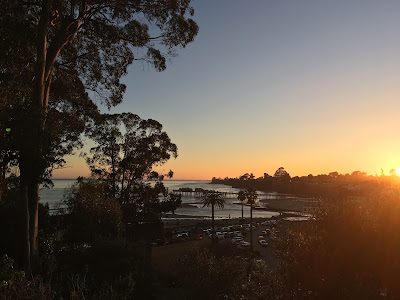 Considering we are half way through Q1 FAL and this is my first of six goals you'd think I'd be bummed.  Nope.  Pleased as can be to be checking one off the list.  I'm also using the same goals like for our local guild WIPitgood challenge. 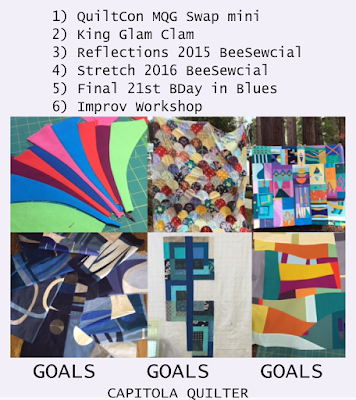 I've also made progress on the other To Do list of 7 items on my radar described in this post .  Only two are outstanding, which is outstanding!

1) My January beesewcial Resolution block was mailed and received.
2) QuiltCon quilts hang sleeve, labels, shipping done with confirmation the package arrival.
3) Not only prepped for but attended the Open Wide workshop, finished and gifted the pouch - boom! 4) "Get a Grip" for our local show is finished and delivered to the person who will be dropping it off - (sadly the same weekend as QC)
5) Handmade to wear to QC - not so far but there's still a few hours left before I depart.
6) bi-monthly BOM isn't due until March, so plenty of hope for that.
7) Cinderella dress and mermaid doll fully mended.

Happy Stitching.
I won't be posting on the blog until after I return from my trip but if you're on Instagram, follow me there as I intend to share a lot.  A LOT.

Karen
Posted by CapitolaQuilter at 10:28 AM