Felicity requested that we make two Portrait blocks for our March BeeSewcial Prompt and name them.  They could be realistic or abstract, they just needed to read as Humanoids.  As someone who always cringed when it was time to draw faces in art class because I found it intimidating, I was both excited and nervous about the challenge.

My local guild had a sew day on NATional Quilting Day so NATurally, I named her NAT.   She was actually the second block to be made but I wanted to share her first because I'm so smitten I can't stand it.  She's sporting a new hairdo with a streak of gray as a nod to transitioning to my own natural color although she's in no way a self portrait.  I had a blast bringing her to life and immediately wanted to make one to keep.

So here's my first block made while at retreat and a few process shots to see how he evolved.   The hair bits were left over from a previous challenge and they jumped right out.  I wanted him to have attitude and the eyebrows are another favorite feature.

Laying parts on before cutting and stitching them into place gives me a general idea and is useful.  In the end he gives off a Cheshire Cat vibe, probably because of the pupils. 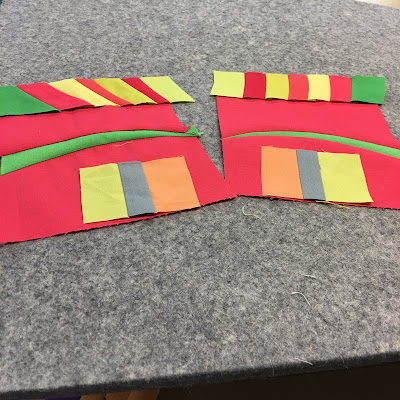 I named him Marley.  He's laid back, not a care in the world with a life philosophy we could all use at times, "Don't worry, be happy".   I almost named him Dude.

The very first thing to be sewn was her lips.  So tricky but they gave me a direction of personality right away.  I had made a bunch of quarter circles for another project that left me with some great cut offs in solid that I pulled from the scrap bin. 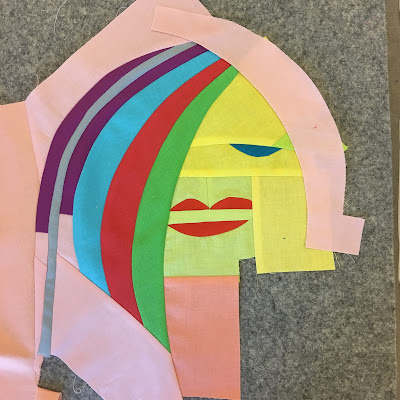 You can see the "notch" where the concave and convex template positioned in the photo above.  That "flip" was originally going to be preserved but I liked the balance of the purple and what happens with the part in her hair.  With improv, I typically do ruler free work until trim up so I thought these might be too uniform at first but I think the contrast is successful.

Here's hoping your day is filled with a little bit of Nat's badass sassiness and Marley's kick back joy.

Happy Stitching, Karen
Posted by CapitolaQuilter at 7:29 AM