Today I thought I'd share a little bit about my Ripple Strudel quilt and add another item to the long neglected TUTORIAL TAB on the blog.  When Carol Van Zandt offered to send me some of her amazing new fabric line Luna Lounge to play with, I knew it was a great excuse to try out the large apple core template I picked up at from the  Jenny Doan booth at Quilt Festival.
The warm grays and black called out for a graphic design. After seeing the QuiltCon bias tape challenge, I picked up the Clover tool but just like the template it has pretty much been sitting ever since.  Andover's textured solid in Lacquer worked perfectly and hand-stiched like butter on the binding.
The right and wrong side of Textured Solid is pretty obvious - because, umm it's textured - so make sure to feed it through correctly to avoid the uncurling of your fold (pictured above).

After a comment from Linda Flourishing Palms on IG about attaching the binding before trimming the excess batting/backing I remembered that I had been taught that originally and used that technique on my earliest quilts.  Verdict is split - there is more stability and a cleaner trim from your stitch line but I haven't converted back.  There's something gratifying about the "haircut" and fresh edge that I find too appealing to wait until after.

Combining FMQ, topstitch and echo stitch made me quit happy and I think lends well to the design.  Super happy to have COMPLETED the first of my FAL Q2 projects (goal setting post here)


Apple Slices - How To

Rather than stick to the traditional Apple Core pattern,   I created apple slices - and chunks.   (Note that I've added additional pictures of each step below that I photographed along the way with another scrappier quilt to give you more samples)

I've used FQs but yardage and a Layer cake would work as well.  Also, if you don't own a template you could print one for free from sources like QuiltersCache and modify the scale.  The arc is different but the concept is the same.

To avoid fabric waste and save time, I folded the FQ first lengthwise and then again to cut four layers at once.  You could even use 2 FQs and get away with 8 layers because they will be trimmed later and the slight distortion from stacking that high doesn't really matter. The squares just need to be at least 8 3/4".

Sew together four-patch blocks and center the template.  Rotary cut around with a slight over cut at each tip, just enough to free to core but not too much - you'll see why in a minute.

Now it's time to clean up those mis-matched outer edges.  If you have a big 16.5" ruler it's awesome - but if not, just trim with any ruler.
Next, line up the center marks on the template and cut as shown below.  Work your way around reorienting the template, "landscape or portrait" as you go.

These become the parts for the quilt edge.  Other than the "floppy ears" that are left behind, there's not too much waste!
For a half slice, sew together 4.5" strips and cut as shown below.  A rotating board is also helpful but not necessary.

I like the variety half slice cores give and they can make layout more interesting.  You can also add in full template cores of course.
The curve is gentle enough to not require pins and the center seam of a quarter chunk actually makes it easier to line up.  I'd recommend finger pressing the center for reference on the half slice or full cores to keep on target. 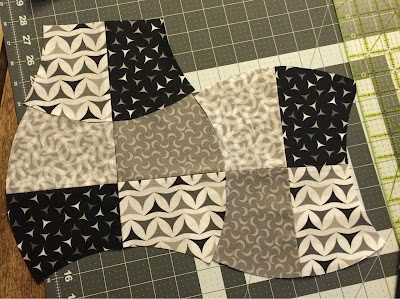 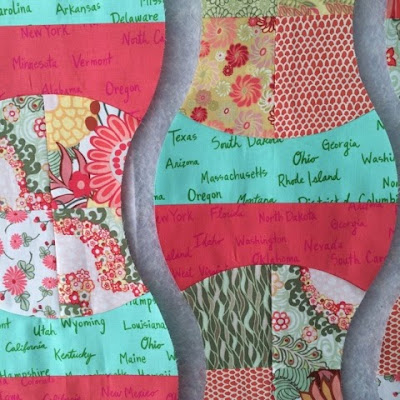 Secondary designs appear depending upon placement, so play around with your layout before deciding.  Seams can be pressed open or to the side. I tried it both ways and prefer open for the piecing and to the side for the rows.


Sorry for the poor lighting on this one.  I wanted to show how I used wonder clips facing alternating directions (red or clear) to mark the bottom of each column (1-2-3). What's your trick for keeping track?

Play around with your feet to find one that you like for the topstitching of the bias.  Before adding the bias down I dabbed a bit of glue here and there to secure it in place.  It's not necessary but I found it helpful.

For the second quilt I decided not to add the bias because I was going for a softer appearance more inline with the palette.   Full reveal of "Chunky Apples Sauce"  coming soon.

If you happen to be at Quilt Market this week or see a photo of Ripple Strudel or Dig Deep in the Andover Fabrics booth #1601- I'd love to see it.  I'm home with the rest of the #notgoingtoquiltmarket folks drooling over the IG feed.
Posted by CapitolaQuilter at 9:06 AM