I've chosen this quilt for Blogger's Quilt Festival Small Quilt category because it was a fun technique based QAL that I enjoyed tweaking to make my own.


My finished #crosscutquiltalong was one of those unplanned sewing delights.  I hopped on board the Quilt Along with hostess @aquilterstable and came out the other end with an actual quilt to gift instead of a typical WIP.   Seeing the variety based on fabric and modifications was a real treat.

Part of the incentive was using up the Black and White 10" squares from an old Flickr swap and a Kona solid jelly roll with colors that played along nicely with a jelly roll of Cotton and Steel basics.

Because I was using 2.5" pre-cuts, I sewed them on and cut the excess off to use in the next step.   Since this step differs from the tutorial I made a point of photographing to illustrate this method as another option.


The binding was stitched on just in time for show and tell at the traditional guild I belong to and I brought it to my MQG meeting too.  I tried to describe the process of sewing, cutting apart and sewing together but when you put it that way it just sounds like what we all do in quilting right? 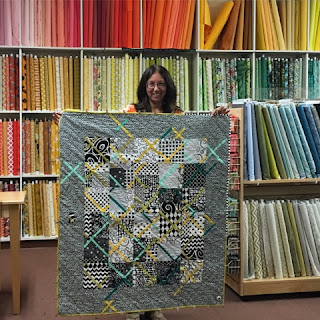 I needed the "before" version to hold up next to it. Glad it was well received by the group and I got several compliments after.

For the quilting, I did an organic gentle wave with several 40 wt Aurifil threads.

The wind picked up during the photo shoot but I kind of love this shot because it shows off the perfect stash backing.

When I gifted the quilt to the expectant parents, I pointed out the "Baby Makes Three" detail.

Some projects torture me once the tops are done and it's time to choose the backing and binding because there are so many ways to go.  This quilt had a strong voice and took very little auditioning before settling on this combo.

Posted by CapitolaQuilter at 11:08 PM