It's time for a bit of blog catch up with the first of four posts featuring my BeeSewcial blocks.    Yes, it's true that Fall is rapidly approaching and the seasons have flown by but I suddenly realized that I neglected to share April, May, June and July so I hope you'll sit back and enjoy a flash back to the recent months gone by.

Marci requested something a little different for April (described HERE on her blog).  With Spring in the air, she asked for four 6.5" squares.  I love the idea of our group creating a floral bouquet of miniature flowers for her.  The Kona midnight background makes the blossom glow.
Although I do have favorite flowers, I decided not to create any particular kind and focus on more of a general feel.  The thin leaves in my first improv composition is my favorite and I like the contrast of the straight stem holding up a top heavy blossom.

With the blue, I just had to get a little scrappy with the gradient colors and wanted to capture the sense of growing towards the sun as well as in various stages of bloom.


In my third block I added a touch of embroidery thread.  The construction of this one was the most labor intensive and IMO the least successful.  I really struggled to convey what was in my head.

Like I said, I didn't consciously set out to depict a specific flower in my approach.  The fourth and final floral miniature developed into an improv bird of paradise all on its own.  When I made it, I had my bags all packed and was just about to hop on a plane to Hawaii. The tiny center stitches were made with embroidery thread but that one very thin sliver is made of fabric.

If I had to pick a favorite. I think it would win.

Leading up to the making of my four blocks, I did take some photos to get me warmed up.  It was helpful to have the Rhododendron  in our front yard in full bloom at the time. 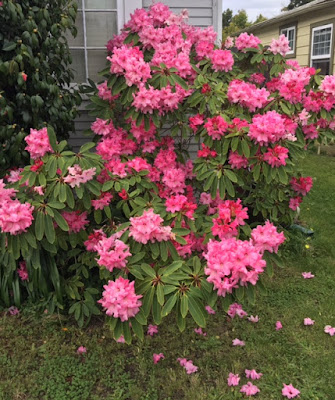 Down the street there is a large hedge that brightens my day when I walk past. 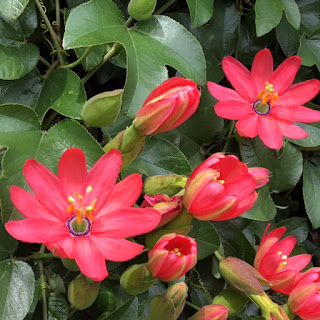 Of course when I was in Hawaii, I took lots of photos of flowers but I will save those for another day.

Posted by CapitolaQuilter at 9:29 AM