Progress - hooray.  After a blazing start with Swoon six months ago- choosing the fabric pairing (fun), chatting it up on the QAL group (fun)... I hit a major road block and locked it away in a project container.  Honestly, I had not enjoyed myself and my seam ripper had gone into overtime - let's just say I was pretty much "over it". Three blocks were complete but there was no way I would survive another six.  But, I put it on my FALQ3 mosaic and made a promise to come up with a plan. 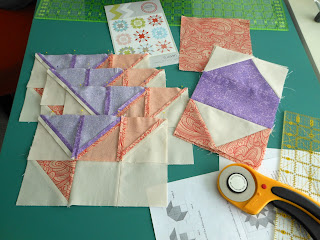 One more block had been cut out and just needed to be pieced. It went together relatively easy although I still found the poor print quality difficult to distinguish parts illustrated in two shades of gray frustrating.  The pdf version is apparently in color which I would have opted for had I known. Doesn't it look as if a copy machine was low on toner?
Normally I don't like to read blogs with an overly negative tone and avoid writing those kinds of posts, but I feel the urge to vent. A 3 1/2 and a 3 7/8 square should not appear exactly the same on the pattern - it messed with my mind.

Adding stars to the layout seemed like a good idea and so far I'm pretty pleased.  I ran out of Kona and either misplaced or used up all of one fabric but at least there is progress with an end in sight. The quilt will be smaller than I'd like unless I add a border so we will see where it's headed.

Linking up to Quilt Story: Fabric Tuesday and since it's almost midnight  WIP Wednesday at Freshly Pieced with guest host  Coleen of The Busy Bean.
Posted by CapitolaQuilter at 11:08 PM